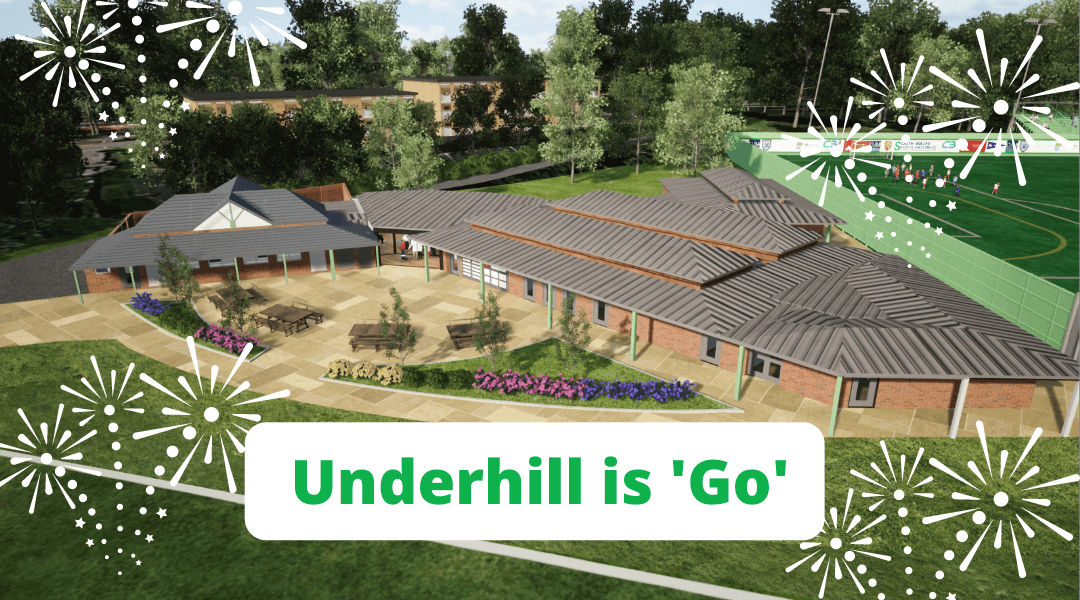 Work on Go Underhill, which will see the building of new facilities, including changing rooms, a new Community Hub & Café and new public toilets, in Underhill Park in Mumbles has been confirmed. Mumbles Community Association (MCA), the charity behind the development, has now formally let a construction contract to Llanelli based T.A.D. Builders Ltd.

The news comes after Mumbles Community Council (MCC) decided to increase their support for the project to cover a shortfall in funding which has occurred because of significant rises in construction costs over the last 18 months. The increases are due to the well-documented impacts of Brexit and the COVID pandemic on the construction industry as a whole.

Although Mumbles Community Association had managed to secure almost £377,000 from The National Lottery Communities Fund towards the build, plus £250,000 from the Welsh Government Community Facilities Programme (CFP) and £25,000 from WRU, MCC’s original grant offer of £875,000 proved to be the game changer which eventually allowed the project to be formally tendered in September 2021.

Whilst Mumbles Community Association was hoping for the best, the charity was anticipating that the tenders received could be over the budget due to the extended period between this being calculated by professional advisers and it being in a position to let a contract. This proved to be the case, but worse, the level of increase was eye-watering.

Recognising the time limits on the £250,000 grant offer from CFP, how much the community in Mumbles have wanted new facilities, and how long they have waited for a scheme to be delivered in Underhill, MCC has stepped in to provide an additional £365,000 of funding to enable the core scheme to get underway.

The construction contract awarded to T.A.D. Builders Ltd. covers the refurbishment of the existing Pavilion, the building of four new changing rooms and the new Community Hub & Café. The base for the additional two changing rooms will also be put in place as part of this contract so that these can be completed as part of the build should Mumbles Community Association be able to secure the extra £200,000 needed during the construction period.

The costs for adding the extra changing rooms after the initial contract is completed would be significantly higher, so the charity’s Trustees will be working hard to try to secure this funding during 2022.

The last, but very important, element of phase 1 of the Go Underhill development is a new floodlit all-weather pitch (AWP). This can only be delivered once the main buildings have been completed since the existing changing rooms need to be demolished to free up some of the space required to accommodate the new pitch. Whilst MCC has removed its formal commitment to grant £325,000 to towards the cost of the AWP in order to provide the additional funding needed to enable the construction contract to be let, the Council has reaffirmed their commitment to exploring future options for funding this element of the development. With all parties working together, it is hoped that the full funding for the AWP can be secured in time for work to start on it soon after the new buildings have been completed.

“After so many years of MCA Trustees and our wider support team working on the plans for Underhill Park, securing all the permissions needed, and trying to pull together the resources to make it happen, we all have a huge mix of emotions right now.

“We are ecstatic that we’ve been able to let the construction contract, even though this is not as comprehensive as we had hoped for. We are relieved that we are finally going to see the first part of the plans delivered, grateful to all our funders but in particular to Mumbles Community Council, and so excited for the people of Mumbles.

“If I’m honest, I think our team of volunteer Trustees is also a bit exhausted by the extended and convoluted processes we have had to go through to arrive at the starting line. But that feeling will soon be replaced by exhilaration as we start to see things finally taking shape in Underhill Park.

“And with our professional team looking after the build, the charity Trustees will be focusing our energies on raising the funding for the final two changing rooms and a new all-weather pitch, as well as starting to plan for MCA taking on the management of Underhill Park.

“The efforts made to get to this point have been incredible and I can’t thank everyone who has been involved enough. This development truly will be by the community, for everyone.”

With the contract now formally awarded, T.A.D. Builders Ltd. will begin preparations to get onto site in Underhill Park, with a start planned for 17 January. Work is expected to take around 12 months to complete.

T.A.D. Builders Ltd. are delighted to be a part of this community project, and able to assist Mumbles Community Association to achieve their vision by transforming the green heart of Mumbles so it is fit for the future.

Get Go Underhill news... directly to your inbox

Keep in touch with the Go Underhill development by signing up to receive our regular updates. These will be sent directly to you using MailChimp.

By signing up, you are giving us permission to send you news about Go Underhill, but you can choose to unsubscribe at any time.