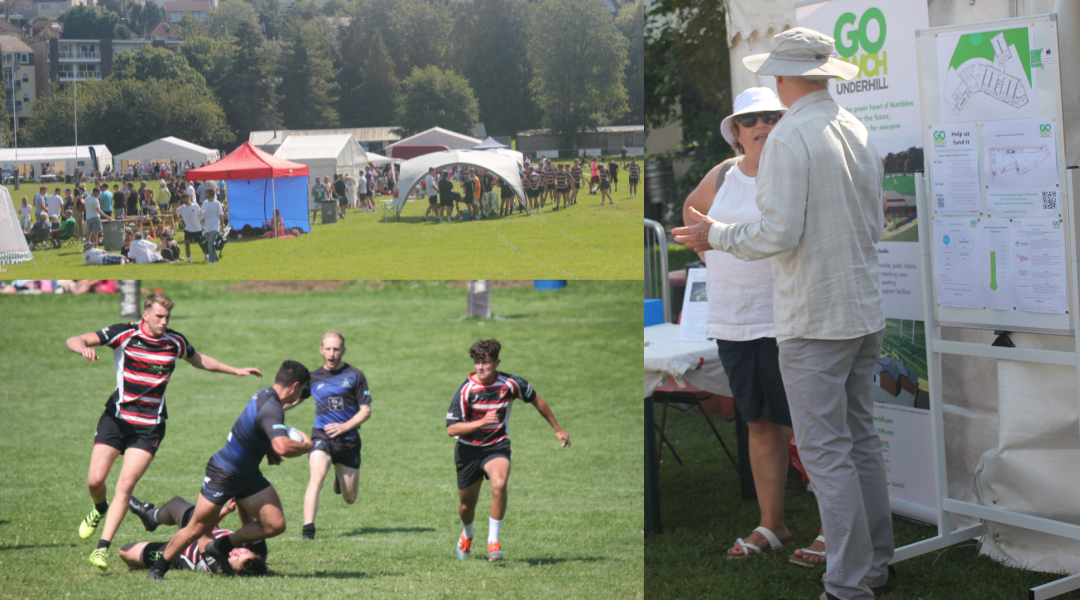 MCA Trustees have been thrilled by the support shown for Go Underhill, and donations made to help it happen, at the hugely successful Cracker 7’s rugby event held over the August Bank Holiday weekend.

Undoubtedly helped by the sunshine, the park was packed with people enjoying the action, both on and off the pitch. And anyone heading for the BBQ or the refreshment tent had a chance to find out more about Go Underhill, either by reading about it or talking to one of the Trustees.

Comments from the public included “It looks fantastic”; “I can’t wait for it to happen”; “it’s going to be amazing for the community”. And many of those chatting to Trustees were delighted by the news that things are finally moving ahead, with tenders for the Phase 1 building works about to go out, and with a start on site in view for later this year.

The information on display included artistic visuals of how the new and refurbished buildings will look; floor plans showing all of the facilities that will be present; details of the grant funds and large donations received to date; and ways in which the public can get behind the scheme by donating to the development, either directly or through AmazonSmile.

Despite the fantastic £1.9m already secured or committed towards Go Underhill, funding is still being sought for a number of elements, including balance funding for the new All-Weather Pitch; creation of an outdoor/educational play area for young children; refurbishing the ‘Spirit of Billy Johns’ artwork and relocating it from the woods to the new development area; and works to the car park and access.

To help with the funding gap, people at Cracker 7’s were encouraged to donate to MCA, or ‘buy’ a piece of the AWP by placing their name on a virtual pitch. Trustees’ expectations were exceeded when the donations made over the weekend amounted to over £1,250.

“Chatting to the public at the Crackers 7’s was a hugely enjoyable experience and a real boost for us. People were so positive about the development and what it’s going to mean, not just for those involved in the sports clubs, but for the community as a whole.

“It’s been challenging working on the project over the last 18 months due to the impact of COVID, and we have particularly missed the opportunity to speak to people face to face. Every one of our Trustees who was at the event came away feeling that all our hard work so far has been worth it. And to have people donating is testament to the level of support for Go Underhill and the desire to see the plans delivered in full. I would sincerely like to thank everyone who came and spoke to us and those who put their hands in their pocket to donate.”