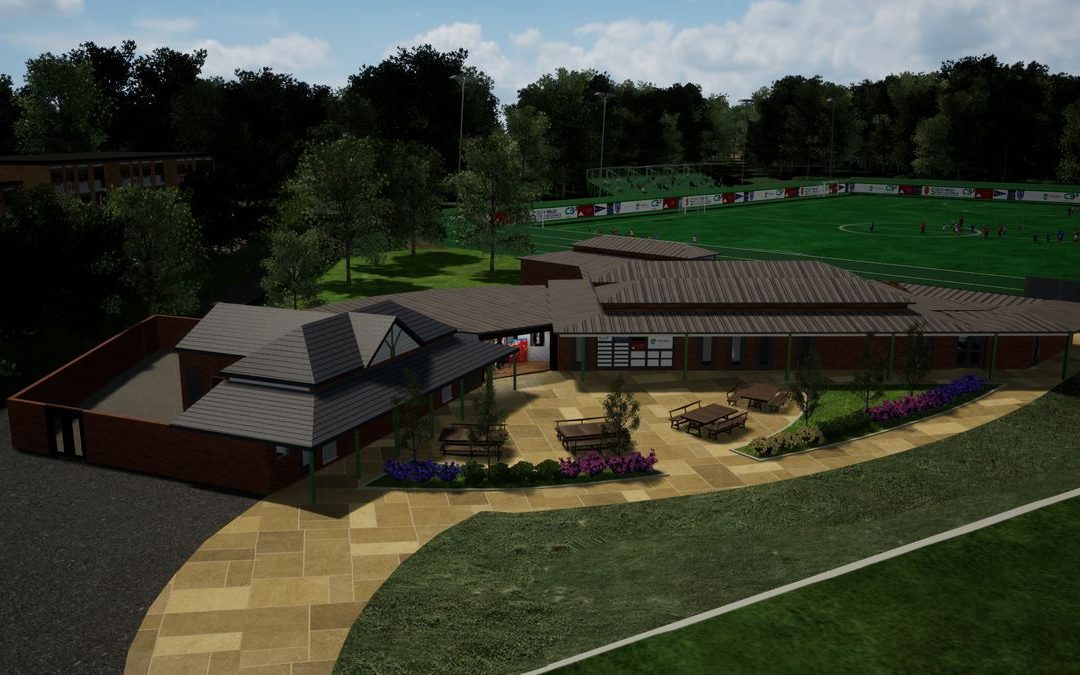 After considering the likely costs for the planned developments at Underhill Park, the charity behind the scheme, Mumbles Community Association (MCA), has decided to split the scheme into distinct phases.

The new phased approach will initially focus on refurbishing the existing pavilion and building a small development next to it, as well as demolishing and replacing the existing changing rooms.  Phase 1 will also include building an All-Weather Pitch (AWP) which will not only provide new facilities for park users and open up opportunities for new sports in the Park, but will also have a key role to play in generating income to support the operation of Underhill Park and contribute funding for later phase.

As well as making it more likely that developments can commence in the park, the new approach will release space in the originally planned community building for other facilities, such as a multi-purpose hall, which would fit will what the community want to see happen.  A modified community building can therefore be developed as a later phase, when funds become available.

Following the decision, MCA has commissioned Huw Griffiths Architects Ltd to design the Phase 1 scheme, which in total will provide a floodlit and enclosed all-weather pitch, new changing rooms, facilities for the disabled, a medical/physio room, a tuck shop, a café/community room, public toilets, secure storage and a management office for the new facilities.

The cost for Phase 1 is likely to be around £2.25 million, excluding VAT.

Early in 2018, Mumbles Community Council (MCC) agreed to provide match funding up to £300,000 over two years for the Go Underhill development.  In addition, MCC has allowed the charity behind the scheme to use some of this funding to commission an architect and an engineer to help develop the proposals.

A topographical survey of the whole Park has been completed and further drainage investigations have been undertaken. The information gathered through this process has enabled the charity to produce a Development Plan for Underhill Park to guide the implementation of the new facilities.

Mumbles Community Association is extremely grateful for the support from MCC, which has led to a big step forward for the project. 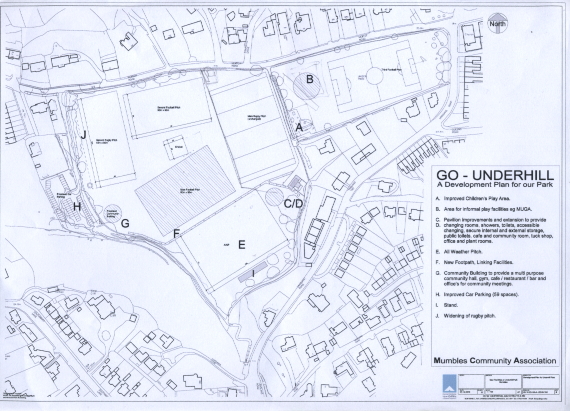 Mumbles Community Association (MCA) Trustees have agreed a Development Plan for Underhill Park, which gives an overview of how the Park can accommodate all the facilities which people want to see, without jeopardising the number of playing pitches provided.

As well as providing a helpful overview, the Plan will be used as a basis for the Deed of Consent which needs to be agreed with the Somerset Trust.  Securing the Consent is one of the conditions MCA has to comply with before taking on the lease.

Once in place, the Consent gives MCA permission to undertake the proposed developments within the Park and for any funding raised from the operation of the Park to be used for the community, rather than being paid to the Somerset Trust.

The Development Plan will be implemented as resources to undertake elements of the development are secured. 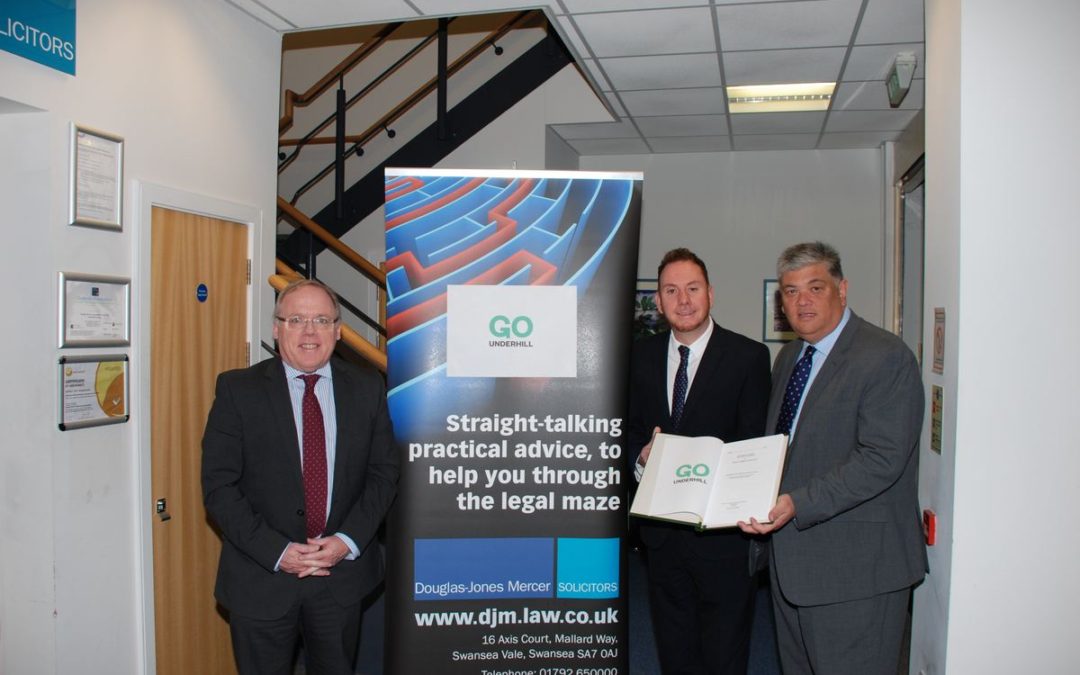 In July 2018, Mumbles Community Association (MCA) signed an agreement to lease Underhill Park from the local authority, the City & County of Swansea.

The agreement will enable MCA to lease the Park at a peppercorn rate for 125 years.

MCA will take over responsibility for the upkeep and maintenance of the Park, which means we would need to generate income to support this work.  Furthermore, any income generated from improved park facilities would be retained by MCA to be reinvested in the local community.

With the agreement in place, MCA is now in a position to start securing the funding needed to enable the development of new facilities to commence. 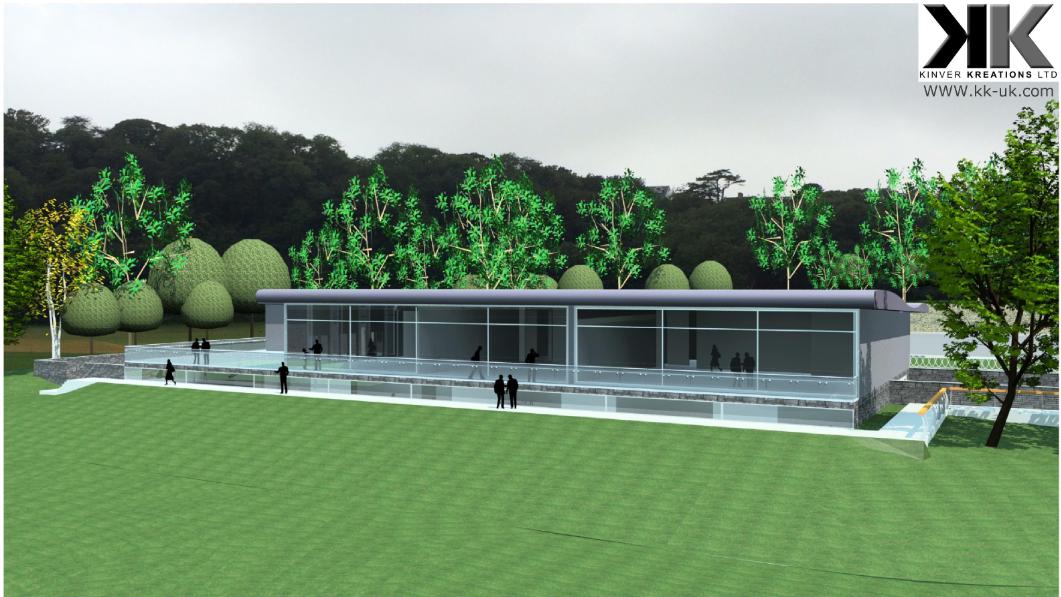 “This is a great achievement for the Mumbles Community Association charity, following close on six years of activity by a group of local volunteers.  But now the work starts in earnest in moving to the next stages of both fundraising and finalising the designs.”

The planned community building has been designed to sit adjacent to the car park at the bottom of the access off Newton Road.

However, the proposals have subsequently been put on hold, pending agreement from City & County of Swansea to lease the Park to the Community Association.  This agreement needs to be in place to enable MCA to seek grant funding for the new facilities.